We will only reach out if there is an issue with your documents. Otherwise, we will have your passport ready in time for your trip!

We will respond within 24 hours 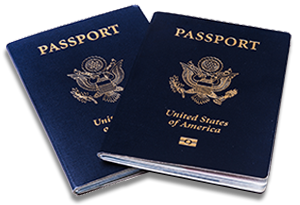 Additional or 2nd US Passport Application

Note: It is not commonly known that the U.S. State Department issues to qualified applicants 2nd or additional U.S. passports. They are legally issued under specific circumstances by the Federal government. Normally they are issued for the following two reasons:

The State Department allows the issuance of the 2nd passport when evidence of such a travel conflict is stated and proven. This is achieved through formal requests and fight reservations showing travel intentions.

Description: The following must be true in order for you to use this method of obtaining a 2ND or Additional US Passport:

Submit Your Most Curent Passport

Submit your most current US Passport as Described Above. Copies are not acceptable

Download complete and sign the US Passport Application DS-82. Be sure to complete all fields and make sure you date your form

If your request for a 2nd passport is being made for business purposes, submit a formal request on letterhead from your company to the State Dept. Follow this format:

Submit ONE recently taken passport type or size photograph. Do not submit pictures with eyewear (glasses), headwear, jewelry, or with anything objects in the background, as they will not be accepted. Passport Photo MUST have a completley blank white background, without any other shades or tints (i.e. dark gray, tan, off-white). See below for proper sizing and examples of well composed photos.

Click Here for a description of the State Department requirements on passport photos.

Download complete and DO SIGN the Letter of Authorization Form(s). This form allows our company to expedite your passport and represent you at the State Department respecting your application form. Choose the first TWO boxes only and check them. The 3rd box indicates you want us to represent you but would rather the State Department deal directly with you when there are problems.'

Submit evidence of your International Departure date (flight reservations) showing at least 2 separate flights which validate and corroborate the need and request for a 2nd passport. If you haven’t made your reservations yet please let us know.

Do You Need a Visa to Travel to your Destination?

Would you like to add this passport to your cart?

As of December 31st, 2015, the US State Department no longer adds additional pages to passports. When you use up your pages, you have to renew your passport.